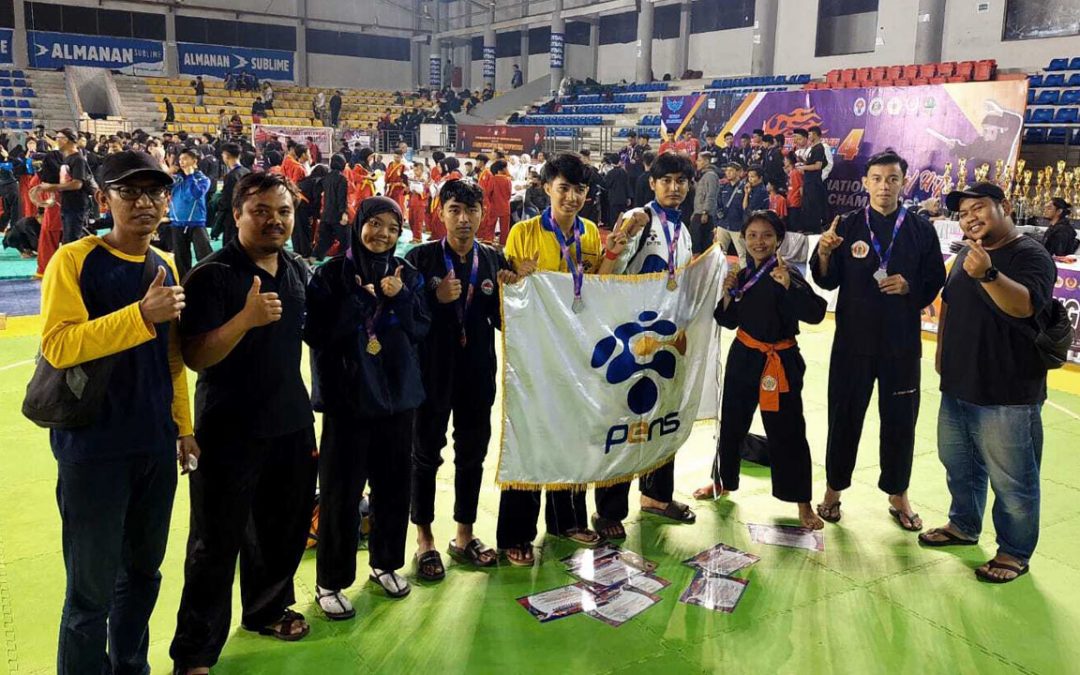 Surabaya, pens.ac.id – Another good news was given by students of the State Electronics Polytechnic of Surabaya (PENS). Through the Bandung Lautan Api International Championship 4 event, seven PENS students succeeded in bringing achievements in the field of Pencak Silat. Participated by more than 2000 athletes from Kindergarten to Student/Adult level, this event lasted for two days (7-8/1), at ITB Futsal Sports Hall, Jatinangor, Sumedang City, West Java.

In this event, the EEPIS contingent sent 7 athletes. The double arts category was represented by Martha Dhila Vany and Putri Dwi Maryanti who won gold medals. The gold medal was also won in the class F competition category for adult men at the student and equivalent level by Muhammad Zidan. No less in the class E category, Puguh Cakrawijaya and in the class D category, Muhammad Nubail Fahmi Amin won a silver medal. Rafli Dian Putra Pratama in the class C category, Yudo Anggoro in the class B category also won a bronze medal.

This achievement was certainly not spared from their hard work starting from physical training to technique for 1 month before the match took place. "We had problems with athletes not being able to participate in training because the activities took place during holidays, but we are still trying to be independent," said Puguh, one of the athletes who also became the PENS delegation. Obstacles that occurred during the preparation certainly did not dampen the enthusiasm of these athletes in fighting for the name of EEPIS.

The delegates who took part in the competition this time certainly felt proud of their achievements and the success of returning unharmed. This proud achievement cannot be separated from PENS support in terms of facilities, infrastructure and facilities for the athletes while preparing for the competition. They also hope that UKM Pencak Silat will be able to boast again about the name PENS in other competitions. (so)