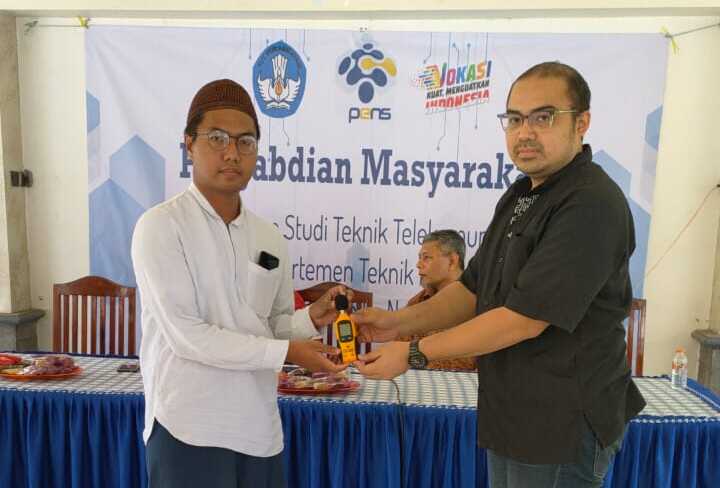 Poor, pens.ac.id – Electronic Engineering Polytechnic Institute of Surabaya (PENS) in this case the Telecommunication Engineering Study Program held community service on Friday (25/11/2022). Located in Karangsuko Village, Pagelaran District, Malang Regency. The tool applied in this community service activity is for monitoring the sound level on the mosque's loudspeakers. This tool is used to monitor the height of the loudspeaker level used in the Imamussalam Mosque.

Loudspeakers whose existence is in a Muslim place of worship have the function of amplifying the sound of the call to prayer or prayer times so that they can reach worshipers whose homes are far from the mosque. Errors in maintaining mosque loudspeakers can also be a problem for mosque managers including poor sound quality and also frequent damage to loudspeakers.

Therefore, one alternative technology that can be used to make it easier to use is using Digital Sound Level Meter or dB Level Meter. Technically, this tool has been calibrated and in accordance with the standard use of instrumentation tools. So there will be many types, but the sound level detected will be the same reading in all DB level meter products. In accordance with the minister's circular which advises that the mosque's vote is within 100 decibel (dB) with no discordant sound.

This sound level meter is able to adjust the volume of the sound that is being used so that the surrounding community. "I checked earlier when the Friday prayer call to prayer sermon for the loudspeaker inside the mosque got a maximum result of 70 dB, and for the loudspeaker outside the mosque it got a maximum result of 80 dB - 85 dB, so according to the rules of the ministry of religion it can still be said to be safe," said Eko. one of the EEPIS lecturers involved in making this tool.

This loudspeaker level monitoring tool has been implemented and granted by lecturers and students of EEPIS Telecommunication Engineering to Karangsuko Village, Pagelaran District, Malang Regency. Through collaborative activities between the campus and the community. "Hopefully this mosque loudspeaker can help the takmir of the Immamussalam Mosque in carrying out the rules from the Ministry of Religion," said the EEPIS Lecturer who is familiarly called Pak Eko. And can be developed again so as to improve the quality of religious life, he added.

Musasi, Representative of Karangsuko Village Head, Pagelaran District, Malang Regency welcomed the work of the EEPIS lecturers and students. "We are very grateful for the sound level monitoring assistance on the mosque loudspeakers donated at the Immamussalam Mosque. Hopefully the service will not only end here but may continue in the future.” he said.