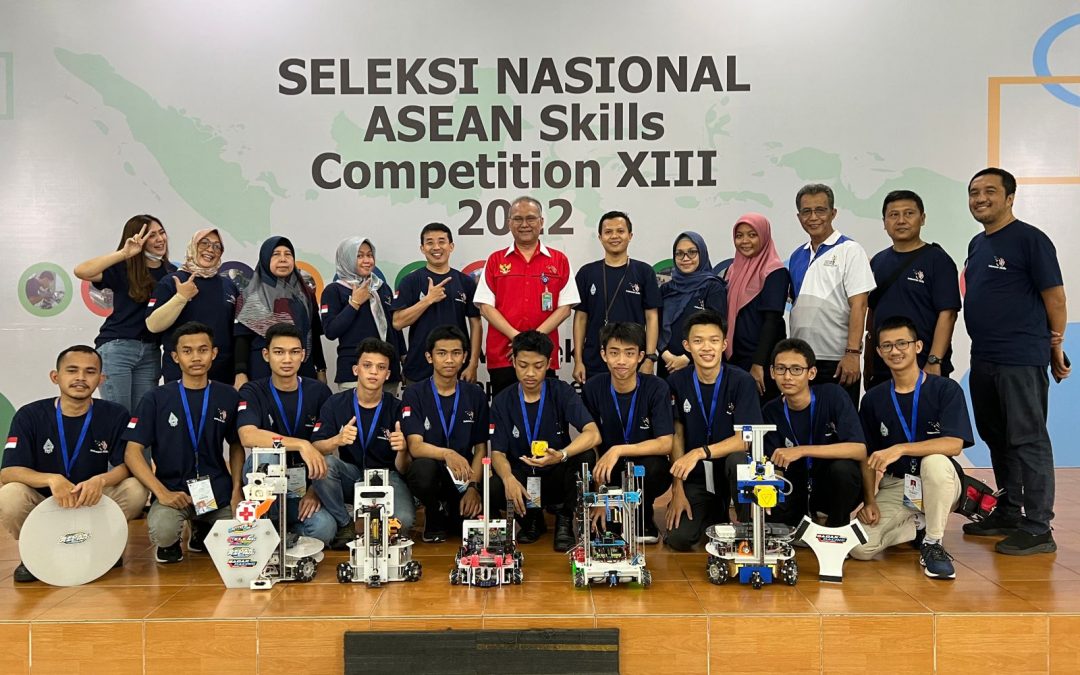 ASC National Selection is a selection carried out by the Ministry of Manpower (Kemnaker) to find potential competitors in the ASC XIII event in Singapore in July 2023 in 16 fields of competition. To contribute to developing competence, EEPIS sent six student representatives according to their respective interests. The six students were divided into two teams in the category mechatronics, and one team each in category Refrigeration and Air Conditioning and Mobile Robotics.

Septian, one of the EEPIS delegates said that his flashback in participating in the national selection began when he followed the Provincial to National LKS along with his teammates when he was in Vocational High School. The team received an ASC regional selection (selection) invitation last July and managed to outperform the other teams and qualify for the national selection. Regarding the preparation for the National Selection, the student who is familiarly called Tian admitted that he had to share his focus in the midst of the density of lectures and the differences between institutions and his colleagues. “Preparing for the national selection and departure this year is a bit more difficult because we are separated from our SMK. So for training and others, we focus on ourselves accompanied by our busy schedule,” explained Septian. This did not dampen the spirit of Septian and his teammates so that they managed to become 1st Place in the category mechatronics. Meanwhile, the other EEPIS teams who managed to get 3rd place could not continue in the training camp.

Meanwhile, the EEPIS delegation represented by Yogi and Denny in the category mobile robotics prepare for approximately three months in this selection after passing the selection stage. In the national selection category mobile robotics, the competing teams are required to create a robot that can deliver drugs and be controlled teleoperationally and autonomous. The three months of careful preparation finally succeeded in bringing Badak Racing V1.3, which is the name of the GO-ON team robot, to 1st place in that category.

Assessment process in categories Refrigeration and Air Conditioning divided into three stages, namely starting from the manufacture of refrigeration components, installation air conditioning, and assembly of the refrigeration system. Sihlahul Mukmin admitted that he lacked flying hours in training so he was able to sit on the 2nd place in that category. However, Sihlahul still makes his parents proud and the name of the campus and will make the best use of the training camp time. "For all of my friends, they are still enthusiastic about learning and trying, and are sure to be able to make the name PENS proud in the eyes of the community and the world," said Sihlahul. (irf)