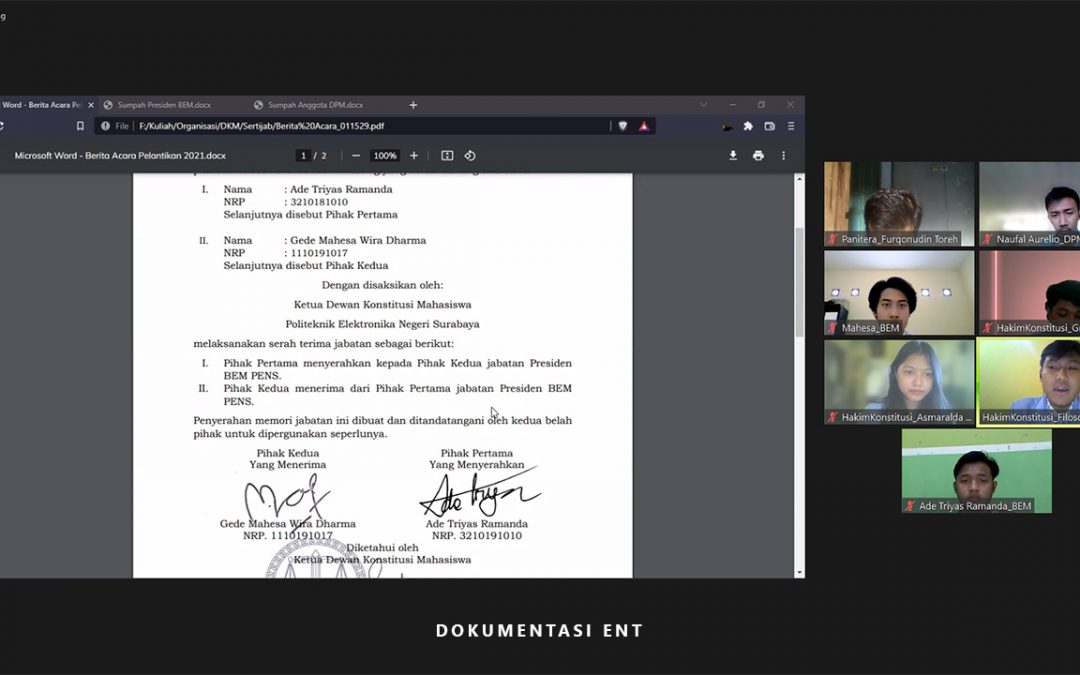 Surabaya, pens.ac.id – The regeneration of the management of the President of the Student Executive Board (BEM) and members of the Student Representative Council (DPM) for the 2021 period was held on Sunday (7/8). Also present and giving a speech, Deputy Director III for Student Affairs and Human Resources, namely Tri Budi Santoso, ST, MT at the online activity via Zoom Video Conference. Acting as the successor to the creation of a good Student Family (KM) of the Electronic Engineering Polytechnic Institute of Surabaya (PENS), the inauguration of the management of BEM and DPM for the 2022 period took place solemnly to continue the mandate of the previous successor to the growing Student Organization (Ormawa).

To open the inauguration, the song Indonesia Raya and the EEPIS Hymn were sung along with the participants. The session, which was chaired by the Chairman of the Student Constitutional Council (DKM), Laurensius Yuda Nugroho, also delivered the minutes before the procession of reading the pledges began. The elected BEM PENS president, Gede Mahesa Wira Dharma, read the pledge followed by the reading of the oath by the members of the 2022 DPM period aloud.

After the inauguration procession, giving a speech by Tri Budi Santoso, ST, MT became the next agenda. In his speech, the Deputy Director III thanked the old management and hoped that the EEPIS Ormawa would be able to complete their duties properly and become an example for all students inside and outside the campus. "Let's show the superiority of EEPIS Ormawa in its management to other campuses," he concluded.

At the end of the handover, there was an introductory session by the elected BEM President and the inaugurated DPM members. In this introductory session, Gede Mahesa as the President of BEM revealed that BEM will be at the forefront of students. On the same occasion, Naufal Aurelio as the Chair of the 2022 DPM expressed his gratitude and hoped for a good contribution to the performance of the DPM in the future. (jess)