Putting Flowers on, the Director of EEPIS Welcomes the Arrival of the EEPISAT Bamantara Team 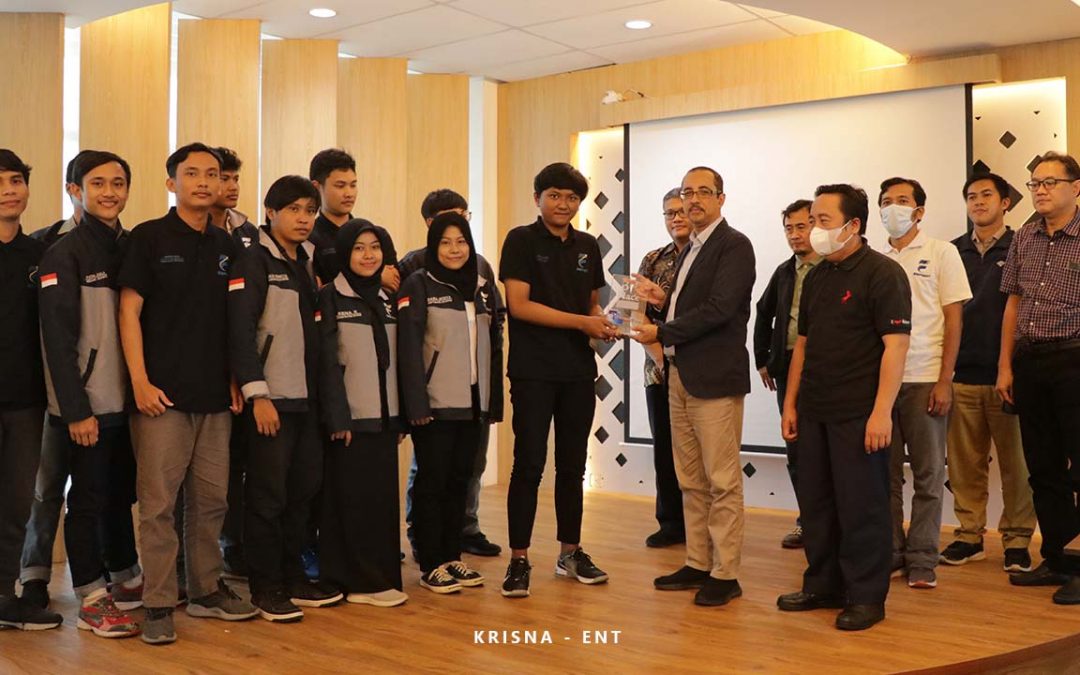 Surabaya, pens.ac.id – After competing at the international level, the Bamantara EEPISAT team representing the 2022 CanSat Competition arrived at the Electronic Engineering Polytechnic Institute of Surabaya Campus (PENS) on Saturday (18/6). The director of PENS, Ali Ridho Barakbah, S.Kom., Ph.D., welcomed the arrival of the team's delegation by draping flower arrangements. Also attended by several academics, the activity was continued by giving directions from the Director of EEPIS on the 5th Floor of the Postgraduate Building.

The team, which consists of eleven PENS students from various study programs, has gone through various obstacles in each round. Various non-technical problems were passed by this team, but they were still able to overcome them. "Although there are various obstacles, one of which is culture shock but the Bamantara delegation was still able to adapt well," said Zulfikar as the chairman of Bamantara EEPISAT. The biggest hope for this team is to compete again at CanSat next year and get the best results.

The success of the Bamantara contingent is not necessarily a mere luck, many people behind the scenes are still giving support for this team. One of them is the supervisor of the Bamantara team, namely Nofria Hanafi, S.ST., MT and Hendhi Hermawan, S.ST., MT Not only that, many other parties support this team. In particular, the Director of PENS expressed his gratitude to the Indonesian Ambassador to the US, Mr. Rosan Perkasa Roeslani who had provided funds and appreciation while in the United States, the Educational and Cultural Attache of the Indonesian Embassy in Washington, DC who had coordinated the smooth running of student activities while in the US for activities in Virginia. and Washington, DC, from 9 to 14 June 2022, coordinating with the Puspresnas (National Achievement Center) Kembidkbudristek to welcome them as the Champion Team and the Mendikbudristek team. Head of Puspresnas who gave a lively welcome to the EEPISAT Bamantara Team upon arrival at Cengkareng Airport. Mr. Nadiem Makarim as Minister of Education and Technology with the Merdeka Learning program. East Java Provincial Government, Sponsors who have helped: Telkomsat, Bank Jatim, PT. Pura Barutama Coating, PT. Len Industri, CV. Mataram Mitra Sentosa, Duniatex and Victor Julius Senjaya, Defense Attaché Assistant.  (ten/hum)