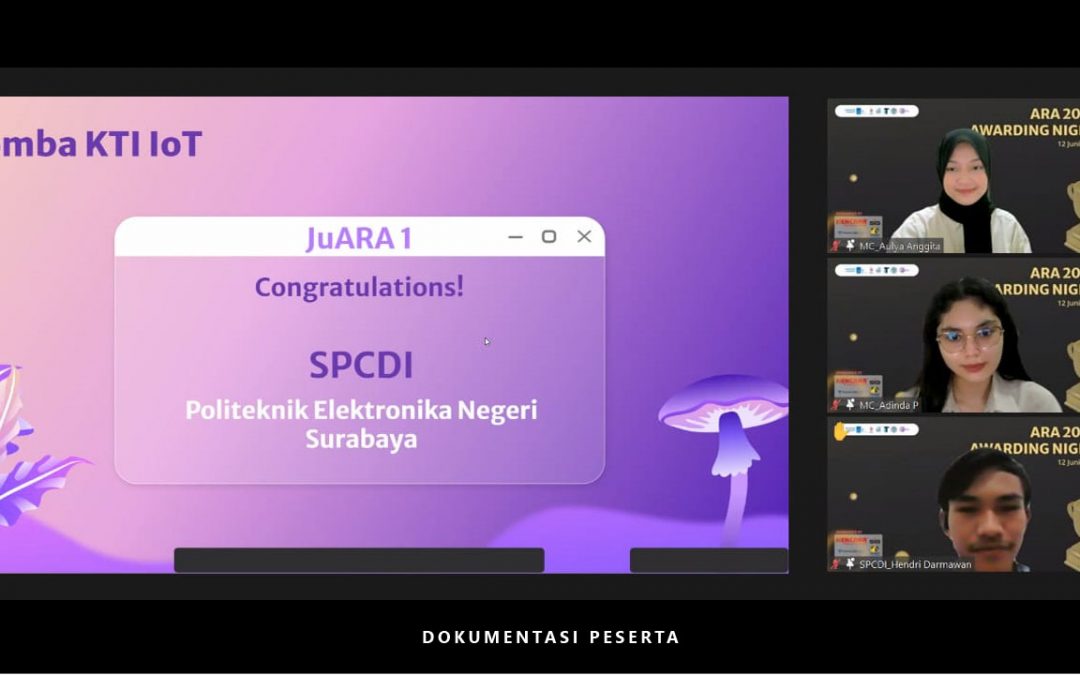 Surabaya, pens.ac.id – The ability of the Electronic Engineering Polytechnic Institute of Surabaya (PENS) students in the field of Scientific Writing (KTI) has returned to yield results on the national stage. The SPCDI and GEFOSA teams, which are Telecommunication Engineering (Telkom) PENS students, won first and second place in the 2022 A Renewable Agent (ARA) competition organized by the ITS Information Technology Student Association (HMIT) via Zoom Video Conference. Raising the topic of Internet of Things (IoT), the two teams gave their best ideas until they came out as champions on Sunday (12/6).

The innovation of weather and climate prediction using surface observation data was an idea by the SPCDI team consisting of Hendri Darmawan and Devina Shafa Anindya. According to Hendri, there are many researches on weather and climate prediction, but there is no implementation with IoT devices. In the future, technology like this is needed to predict the weather more accurately.

Dhuma Aziza Altarin, Ninda Syafa Ainun Nadya, and Poppy Berliana Ramadhani who are members of the GEFOSA team also gave their best ideas for this competition. Promote innovation in the form of a monitoring tool for rice field conditions that is able to minimize the number of crop failures because it can maintain the power class of rice fields. Through this tool the data is able to select suitable rice to be planted in the area. This is very useful because it can increase food productivity.

There were three rounds that the two teams went through before they became the winners of the 2022 ARA. It is highly hoped that the two teams will make their innovations useful for the environment and can be developed properly to be more efficient. "Hopefully, it can be developed further, both for accuracy and efficiency," said Hendri Darmawan (jess)